Most of you have probably seen the movie. Some of you may have already read the book that the movie was based on. I’ll admit Johnny Depp did a masterful job in the movie and I sometimes have a hard time imagining how Hunter S. Thompson actually was in real life.

But Fear and Loathing in Las Vegas is about much more than drugs, gambling, and depravity. Thompson hooks the reader from the very start. His first sentence reads: “We were somewhere around Barstow on the edge of the desert when the drugs began to take hold.”

How, I ask, can you not be curious where this is going to go? As with many movies based on books, it’s hard to fully capture the full breadth of Thompson and Dr. Gonzo’s experience in Vegas during the Mint 400 motorcycle race.

Of course, Thompson’s actual time spent reporting on the race was quite minimal in the grand scheme. My goal in this review is to pull a few resonant themes out and provide a useful synopsis for anyone interested in reading the book for yourself!

Theme 1: The Duty is to The Story, Or To Create a Better One!

Through his writing, Thompson certainly doesn’t seem like a man who had trouble creating a story if the one he was initially being paid to report on wasn’t particularly interesting to him. He was commissioned to cover the Mint 400, but this book, and the trip it is based upon became about much more than that.

Early on, Hunter states, “…I was, after all, a professional journalist; so I had an obligation to cover the story, for good or ill.” However, Thompson spends only one chapter, a mere six pages, of Fear and Loathing in Las Vegas actually reporting on the events of the Mint 400.

His opinion of the race is nicely summarized in this quote:

“They roared off, and so did we. Bouncing across the rocks and scrub oak/cactus like iron tumbleweeds. The beer in my hand flew up and hit the top, then fell in my lap and soaked my crotch with warm foam. “You’re fired,” I said to the driver. “Take me back to the pits.”

Despite a perceived lack of enthusiasm for his assignment, Thompson was able to turn his experience into one of his most popular books, which was eventually adapted into a blockbuster movie.

So, I’m not sure if they teach this in journalism school, but my take away is, “Your duty should always be to the story, but if it’s a crappy story don’t be afraid to create a better one!”

Theme 2: Dealing with Traffic Cops Isn’t as Straightforward As You Think

After the conclusion of the Mint 400, Thompson, aka Raoul Duke, receives an urgent telegram from his “attorney”, aka Dr. Gonzo. The telegram states that he should not leave Vegas and that he has a new assignment.

The assignment is to cover the National Conference of District Attorneys. But Thompson doesn’t feel even close to a state where he could accept such an assignment so, instead, he gets in the car and rips towards Baker, California.

He then describes the proper way to deal with a traffic cop:

“The thing to do–when you’re running along about a hundred or so and you suddenly find a red-flashing CHP-tracker on your trail–what you want to do then is accelerate. Never pull over with the first siren-howl . . . He will follow.

But he won’t know what to make of your blinker signal that says you’re about to turn right . . . keep signaling and hope for an off-ramp, one of those uphill side-loops with a sign saying “Max Speed 25” . . . and the trick, at this point, is to suddenly leave the freeway and take him into the chute at no less than a hundred miles an hour.

He will lock his brakes about the same time you lock yours, but it will take him a moment to realize that he’s about to make a 180-degree turn at this speed . . . but you will be ready for it, braced for the Gs and the fast heel-toe work, and with any luck at all you will have come to a complete stop off the road at the top of the turn and be standing beside your automobile by the time he catches up.”

Now, I should be clear: I don’t advise this approach the next time you notice those flashing red lights in your rearview mirror. However, what Thompson suggests is that there is more than one way to deal with traffic cops. And that taking them for a bit of a joyride may actually be exactly what they’re hoping for when they catch a speeder.

Alas, Thompson lived in a different time with different rules. The social contract between citizens and law enforcement has changed. Roads are more crowded. Cops are, perhaps, a bit more serious. And we are certainly more sensitive to anyone causing “a public menace.”

And Thompson Never Missed a Chance at a Political Dig

The bright lights, noise, and constant activity of Vegas aren’t for everyone. I’ve personally visited more as a young man than I have since I’ve come of legal drinking age. And I think I had more fun riding roller coasters, going to shows, and visiting museums as a kid than I did at pool parties and in clubs as an adult. It takes a special kind of party lover to handle Vegas and to keep going back for more.

Thompson summarizes this sentiment nicely toward the end of Fear and Loathing in Las Vegas, while also seizing an opportunity to take a shot at some of his despised contemporary political figures:

“A little bit of this town goes a very long way. After five days in Vegas you feel like you’ve been here for five years. Some people say they like it–but then some people like Nixon, too. He would have made a perfect mayor for this town; with John Mitchell as Sheriff and Agnew as Master of Sewers.”

While I’m only historically familiar with the political climate of the time, I can’t help but enjoy Thompson’s brand of political satire. If you’re interested in more of that type of writing, as opposed to Thompson’s unique chronicles of his own debauchery, be sure to also check out Fear and Loathing: On the Campaign Trail ’72.

Theme 4: Some Days We Just Need to Stop and Think

Ok, I understand. This might be an unexpected theme to end with considering the wild journey we’ve been on through the first three-quarters of this review. While Thompson was certainly a proponent of experience over preservation and action over meditation, even he knew that on some days when things are falling our way, it’s best just to stop and watch the world go by.

He summarizes this nicely towards the conclusion: “Every now and then you run up on one of those days when everything’s in vain . . . a stone bummer from start to finish; and if you know what’s good for you, on days like these you sort of hunker down in a safe corner and watch.”

While it feels like a weird twist to conclude a post about Hunter S. Thompson by plugging meditation and wellness, I’m going to do it! Because Thompson himself, maybe more than anything else, was all about twists.

His books keep you guessing and will have you on the edge of your seat from beginning to end. Sometimes you’ll have no idea where it’s going, but that’s a lot like life. You better just hang on and enjoy the journey.

But on that note, if you’re interested in health and wellness and/or meditation, please take some time to check out two of my favorite resources: CounterCulturist and the Wander Well Podcast. If you like what you hear and read there, be sure to give some props to the creators of those awesome sites!

Woody Creek, Colorado. That’s where Hunter S. Thompson lived out his final years. If you’re not actively looking for it, you’re not going to find it. But rest assured, it’s there! Located just off Highway 82 between Snowmass and Aspen, Woody Creek’s “downtown” is little more than the Woody Creek Tavern and the adjoining Community Center.

The tavern’s walls are lined with Polaroids of more than 30 years of visitors. If you look closely you’ll see photos of Thompson with Johnny Depp and a surprising number of other celebrities. You can also sit in the corner chair at the bar that Hunter would hold down regularly when he was still alive.

If you need to kill that hangover the next morning, head on over to the Community Center for coffee and a breakfast sandwich and if you’re hanging around for another day, you might get lucky to catch a yoga class there later in the day. I’ve also heard rumor of a recently opened distillery in town, so be sure to check that out too!

Let Me Know Your Thoughts on Fear and Loathing in Las Vegas!

I’d also encourage you to share this review with others if you found it particularly insightful or helpful. Be sure to tag @ballisterwriting on Facebook or Instagram if you do!

The point of social media, after all, is to be SOCIAL! I don’t need followers or likes, but I’d like to contribute to a real conversation about how we continue to improve as a society and as individuals

Fear and Loathing in Las Vegas: A Savage Journey to the Heart of the American Dream 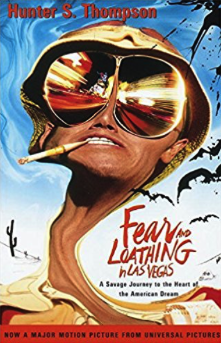 4 thoughts on “Fear and Loathing in Las Vegas: A Book Review”